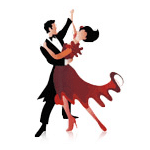 Learn all about the foxtrot!

What is the foxtrot?

The foxtrot remains one of America’s most beloved dances. Originally a series of relatively quick steps that resembled a trot, it has since evolved into a graceful, sophisticated dance style with long, slow movements. Although flexible enough to be danced to just about any type of music, it’s at its best danced to a big-band song.

History of the Foxtrot

Dance experts dispute the origins of the foxtrot, but one of the most widely-held theories is that a vaudeville star named Harry Fox invented it while performing in between movie showings at the New York Theatre. The story goes that Fox had initially developed a series of trotting steps to ragtime music that proved enormously popular to the movie-going audiences, and eventually Arthur Murray and a handful of other dance instructors standardized the steps into a recognized dance style henceforth known as the Foxtrot.

As anyone who has seen a foxtrot performed will remember, however, the contemporary foxtrot looks nothing like an actual trot. In fact, not too long after its creation, choreographers realized that the original foxtrot would prove too tiresome to perform for long, so they developed a slower and more fluid style that suited dancers better and which could be done even in small spaces. The modern foxtrot retains much of its ancestral characteristics, however, not just in name but also in the use of 4/4 time and its reputation for being a casual yet intricate social dance that, as one commentator put it, “is one of the easiest to learn and one of the hardest to master.” Today, it remains one of the most popular dances in the United States.

How to Dance the Foxtrot/Basic Steps

As befitting a dance decades old, the foxtrot has a number of variations. The international foxtrot, for example, has long, slow and continuous movements that often require more space than is available in the standard nightclub. The modern American foxtrot takes much of its inspiration from its international sibling but looks very similar to the type of dancing that Fred Astaire and Ginger Rogers demonstrated so effortlessly on the screen in the 1930s. It partners beautifully with big band music, but its versatility allows it to work equally well with most music genres.

Regardless, there are some basic guidelines with regards to dancing the foxtrot:

The following is the basic foxtrot forward step for the leading partner:

From this basic step, you can progress to more complicated moves such as chasses, turns and weaves.

Foxtrot in the Movies