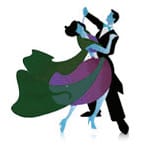 Learn all about the Viennese Waltz!

What is the Viennese Waltz?

The Viennese Waltz is the oldest of the ballroom dances still practiced today. Originally a folk dance in rural Austria and Germany, it’s a fast, vibrant and sometimes dizzying dance that requires quick but smooth and elegant turns. The Viennese Waltz remains a popular choice for dance competitions and ballroom dance scenes in the movies.

History of the Viennese Waltz

True to its name, the Viennese Waltz can trace its lineage directly back to German and Austrian rural folk dances, especially the Austrian Landler. (Keen musical fans will remember the Landler as the dance that the Captain and Maria had performed — albeit briefly — in a scene in the film, “The Sound of Music.”) In the Viennese Waltz, as in its predecessors, couples did not dance in the closed position but either in a semi-closed (i.e., similar to the closed position but rather than facing each other directly, they danced at a sort of diagonal to each other) or side by side. In addition, the original Viennese Waltz saw couples dancing in a circular formation around the dance floor, rather than independently, as they do now. You can often see this more formal, synchronized waltz on period films that feature ballroom dance scenes.

The Viennese Waltz evolved as renowned composers such as Johann Strauss began to create music specifically for the dance. It soon swept the social scene throughout the empire, reaching England by 1812. By the interwar years of the 20th century, it had lost some of its luster, but it soon regained its popularity and is now considered one of the most beloved and well-known ballroom dances in the world.

How to Dance the Viennese Waltz/Basic Steps

The Viennese Waltz moves at a faster tempo than the slow waltz and thus requires a little more practice. Take the following into consideration as you begin learning how to dance the Viennese Waltz:

The following are the instructions for the first step of the Natural Turn, a basic turn in the Viennese Waltz, for the leading partner:

Viennese Waltz in the Movies

Come visit our dance studios in Mesa, AZ and start dancing today! Get a free dance lesson from Arizona's leader in dance!